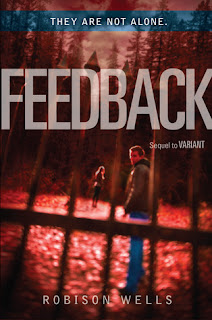 Let’s take a look at Feedback by Robinson Wells, the sequel to Variant.

The Story-
At the end of Variant, Benson and Becky are on the run. In Feedback, they arrive at a small encampment filled with people they knew from the Academy, people who were dead. Soon they learn the truth about the teenagers in the camp and the robots at the school.

Benson and Becky have nowhere to go, so they hide within the walls of an old fort, hoping to evade the evil wardens of the Academy. The longer they stay, the more they learn about the strange experiments of the robots and the twisted plans of Maxfield Academy.

Benson is determined to stop the madness, but at what cost?

My Thoughts-
This book wraps up the mystery of Maxfield Academy well. At the end of Variant, I didn’t know what to think. Robots were strange enough, but then we run into the dead children who aren’t dead, but older. This is a great twist. It throws a whole new dynamic into the mix. Benson had a relationship with Jane at the academy, the Jane on the outside is older, and not the same person he was with, and yet his feelings don’t know the difference.

The author does a great job pulling the reader along. The whole time you can’t help but ask, “What the heck is going on?”. In fact, it isn’t until the last chapter of the book that everything clicks into place, and you’re like really? Oh, that’s cool. The whole concept that is left at the end is eerie, and yet Benson and Becky are finally safe, somewhat.

I enjoyed the mystery and intrigue of the entire plot. Good job with a strange and wacky story.
Posted by Dorine White at 6:00 AM