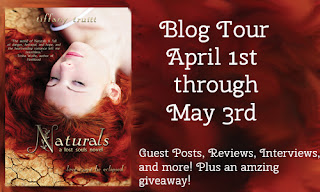 Welcome to this stop on the Naturals Blog Tour. A YA dystopian by Tiffany Truitt- Naturals is book 2 in the Lost Souls series. The publisher is offering up 3 paperbacks! Just fill out the rafflecopter form to enter.

The Story-
Tess, Henry and Robert finally make it to the isolationist's camp, but it is far from paradise. The isolationist's live a hard life, each working for the food they eat. Many of the younger kids dislike Henry and Tess, and believe them to be spoiled. Tensions rise and grow worse as Tess insists on returning to her old compound to find the little sister she left behind.

Somebody doesn't want her to leave, and bloody clues are left to encourage her to stay. But, Tess is determined. Before she can leave, she contracts a bronchial virus, and without medicine, lies on her death bed. Her only hope is James, and his visions of the future.

I like how this book picks up right where Chosen One's left off. It makes the story more fluid. Poor Tess is taken to the isolationist camp, and James is sent away. Trying to get on with her life, Tess and Henry start a little romance. It is not a surprise, there were hints in book 1. We get a nice touch of two old friends supporting each other. What is a surprise is the way Henry acts, he becomes a bit dubious and sleazy. This becomes obvious when Tess is ill. Many will say, all is fair in love and war, but he just had to know she wouldn't forgive him.

Then we have the subplot about returning to find Tess's sister. I really would have enjoyed a more active approach. I really wanted there to be more. Perhaps the mutant abnormals could attack, or there could have been more of a struggle to get to the isolationists, or a more active Eastern presence. I'm not sure what, but something was missing to make the tension high.

The last few chapters of the book are the most exciting. We finally get James involved, and head off to find the sister, and BAM, awesome twists develop. But, then the book is over, right when it got good. Is it worth the read? Yes, especially because the ending sets up a great sequel.