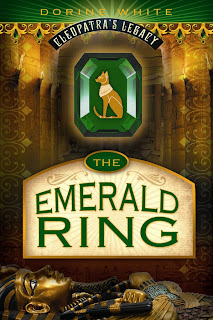 For my readers- an excerpt not found in the published book!
Egypt- 30 BC
The velvet pouch hurtled across the room. Its cords whipped behind it and tangled in the servant's outstretched hands.
Cleopatra's tense voice rent the atmosphere. "Hurry, there's not much time." The horrified servant looked down at the lumpy sack resting in his palms. The queen continued, "I'm placing all my trust in you. Don't let it fall into Roman hands."
The servant's legs trembled. He knew his own life was worth nothing compared to the precious objects imparted to him.
"I will not fail you." The words fell from his lips in reverence. "Your legacy will be safe."
The queen paced the floor in determined strides. Her short black hair bobbed against a tan face. Her eyes met his. "On your life, see that it is! I'll not allow Egypt conquered so easily."
He stuffed the precious bag into his linen tunic and left the royal bed chamber. Halfway down the hallway he abruptly stopped mid stride and quickly ducked down a narrow side passage. His timing was perfect as he avoided two Roman Centurions lurking in the torch lit corridor, but he collided with one of the queen's maid servants. The wicker basket she held awkwardly in her arms wobbled and an angry hiss emanated from within its dark confines. The maid cast him a nasty look before hurrying on to the queen. He knew the queen's plan was now in motion and rushed to leave the building before the chaos began.
Just as his bare feet touched the hot desert sand the sound of running soldiers filled his ears. The deadly asp had done its job. He paused to catch his breath, pressing his back against the palace walls. The last ruler of Egypt felled by a snake. His head shook in frustration, and then he hurried on to find the royal historian and give him the first piece of the royal treasure.
The Story of The Emerald Ring begins May 14, 2013 at a bookstore near you!
In the Seattle area? Come to the Book Launch Party at Third Place Books in Lake Forest Park, WA. Wednesday, May 22nd 7-8 pm. Click HERE for more info.