Welcome to YA Friday! Today I have a seriously creepy new release for you, Divah by Susannah Appelbaum. This one took me by complete surprise, so let me tell you about it. 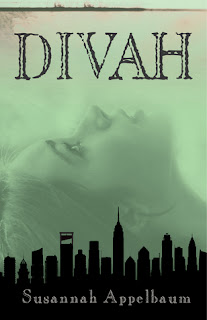 Itzy is a seventeen-year-old girl who is invited to spend some time with her snobby aunt at New York's Carlyle hotel. Once there she meets freaky people, and receives a torn up pamphlet about Divahs, or female demons. As her eyes are opened to the supernatural, she realizes she is surrounded by soul stealing demons and fallen angels.

When the Queen of the Damned checks into the hotel, with the intent on possessing Itzy for eternity, Itzy has to save herself and stop the Queen from opening the gates of Hell and unleashing death upon the world.

My Thoughts-
Truly a Gothic creep fest! This story is the time old tale of the battle between good and evil, one that replays itself several times throughout history. The setting really steals the show. The Carlyle hotel is the embodiment of long forgotten decorum and polite people who will sweep anything under the rug, even murder. The hotel is riddled with underground tunnels and strange staff members. There is even a bar filled with paintings of bunnies.

Itzy and Luc are the two main characters. Luc is a fallen angel who is trying to earn back his wings by protecting Itzy, and falling in love with her of course. We get  his back story, and learn all about how he originally was fooled by the Queen of the Damned back in Paris 1789. Itzy is a fun character with an interest in photography. I was amazed that she didn't run screaming from the hotel at the very beginning.

Possession, demons, oh my! The story is an original tale of horror and dark fun. I did find a couple plot issues, which kept me from giving this one a perfect 5. I'm going to mention them so that if any of you figure them out, you can let me know. **** SPOILER ALERT**** First, at the very beginning Luc mentions demons crawling into your bag if you place it on the floor. Why then does he not shake out Itzy's bag at the train station? It would have prevented the whole mess. Second, the only way to open the gates of Hell involves having an angel's feather. Itzy steals back the feather, so how is Divah still able to open the gates in the hotel? And last, regarding those gates. We are told that if they open it is the end of the world. Well, they open and nothing happens. Nothing comes out. Plus, they don't shut them again, just fill the basement with water. What? How is that supposed to stop demons. So, that's my two cents.

I did love the story telling and the characters are so rich and bold. I give this one 4.5 stars and if you like dark, humorous horror, you really should read it!