I have a great interactive book to share with everyone today. It is not strictly YA, but it is based on a video game that teens play. 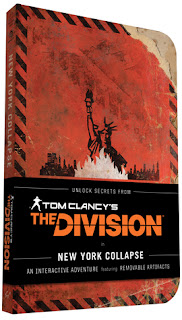 So, Tom Clancy's The Division: New York Collapse is really a two for one deal. The basic book is a survival guide to a long term collapse of society. It goes through amazing details about how to survive, what to use, where to go, and what to think. Wow, it was a true eye opener. If I haven't mentioned it before, I'm a prepper. Yep, I take emergency preparedness seriously, probably why I like all those end of the world and dystopian books. So, the guide alone would have been something I would buy.

The interactive/second part of the deal is a personal journal written by April, a woman living during the collapse of New York City. Her husband was a biologist, killed for his germ research. She carries the survival guide with her, using it to record her journey and to unravel what exactly happened in New York. She also leaves little puzzles throughout the book in case it ever falls into the wrong hands.

The journal is written in several colors of ink. Each color represents a different period of time. So, when reading, you often find yourself reading notes that involve different time periods of April's survival. "She" also leaves different maps, transit cards, and other interactive products within the pages.

This is a really fun book. I give it 4.5 stars, and that's only because it is a bit hard to follow smoothly.
Posted by Dorine White at 5:00 AM