Book Release and Giveaway! From Titans by Mary Ting

The Titans possess power more than anyone anticipated, and Cronus is hungry for revenge after his own children locked him up in Tartarus.

No one is safe. Not even the humans. Visit the world of Descendant Prophecies in FROM TITANS by Mary Ting… 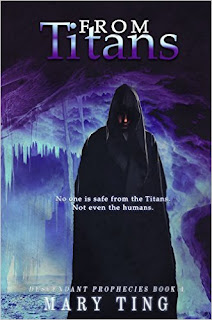 Everyone is searching for Mason.

Zeus sent Hermes, and the Oracles have used their magic, with no success. A sparkle of hope arises when Eris, the goddess of Chaos, sends an invitation to her wedding engagement party. She’s holding Mason hostage, and Skylar and her friends only need permission to enter Eris’s world to rescue him.

At the party, Eris gives them one condition: In exchange for Mason, they must travel to the Land of Reverse and bring back the bottle of gold water King Midas used to wash himself free of his gift. Further chaos follows when Eris not only sets up a hunt in the Labyrinth of Crete, but makes a bargain with the Titans she rescued.

The Titans possess power more than anyone anticipated, and Cronus is hungry for revenge after his own children locked him up in Tartarus. No one is safe. Not even the humans.

Excerpt:
“Look what I learned to do. I learned this trick from Mason.” Nick used his light and raised the meatball from his dish. An electric sizzling light crackled around it as it paused in midair. “Pretty cool.” His grin shone as bright.
“I’m still better at it,” Mason joked.
“Show off,” Hades mumbled. “Just like Zeus.” He snickered and snapped his fingers. The meatball puffed up in flames and dropped on the table linen.
Poseidon pointed where the fire grew and water from his cup flowed out like a fire extinguisher. Steam rose from the table.
“Could we have a normal dinner?” Everett rolled his eyes and ran his hand down his face. As for everyone else, they had a good laugh and continued their dinner as if nothing had happened.
“Boys will be boys.” Kayla shook her head.
Amanda rolled her eyes. “I believe you mean gods will be gods.”

Author Bio- Mary Ting International Bestselling, Award-Winning, Author Mary Ting/M. Clarke resides in Southern California with her husband and two children. She enjoys oil painting and making jewelry. Writing her first novel, Crossroads Saga, happened by chance. It was a way to grieve the death of her beloved grandmother, and inspired by a dream she once had as a young girl. When she started reading new adult novels, she fell in love with the genre. It was the reason she had to write one-Something Great.
BUY LINKS