Welcome to YA Friday! Today I am reviewing the new release, Doreen, by Ilana Manaster. First off, how could I resist reviewing a book that uses my own name? (I know it is spelled different, but I'll take it :) Second, holy moly, this book is a conundrum, let me explain- 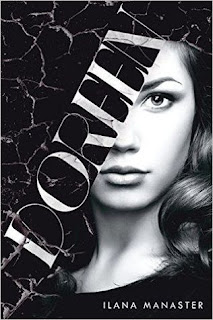 Doreen Gray comes to Chandler Academy a pimple faced, frizzed haired, overweight teenager. She is welcomed by her cousin Biz, who just wants to help Doreen fit in and not be bullied, and by Biz's socialite roommate Heidi.

Heidi gets right to work trying to help Doreen fit in, including creating a profile for her on the school website. Biz, who has an interest in photography, takes and air brushes the pictures, creating a beautiful, and classy Doreen.

The next morning, Doreen finds out that she has switched appearances with the picture, and now she is beautiful and sexy, while the picture remains her true self. Life opens itself up to Doreen. She becomes popular with other students and boys seem to throw themselves at her. As her pride grows, her soul darkens, and the image in the photograph turns devilish.

Now accustomed to privilege and power, Doreen ruins the lives of those around her, even her kind cousin Biz. Who can stop the beautiful monster?

My Thoughts-
Wow, this book is a work of art. I have not read Oscar Wilde's The Picture of Dorian Gray, which this book retells, so I can not tell you how close this modern adaptation is or the originality of plot points. So, I'm just going to tell you my thoughts as a first time reader.

I found this story to be a mash-up between Jane Austin, Clueless and the Twilight Zone. Jane Austen because the language used is very proper and high society. So much so, that I often had trouble relating to the main characters that are in high school, as they tended to talk like mini-adult socialites who have their noses stuck up in the air. As I continued to read though, these rich, little socialites and their language evolved into something more, almost as if language could be a character all on its own. I find it hard to put into words this strange occurrence. It definitely fits with the plot.

Now, let me tell you about the Clueless and Twilight Zone mix. Clueless is obvious. We have the "different" girl being made into a popular girl by a manipulative, controlling peer. Twilight Zone because of the odd powers of the photograph and the demon powers it seems to endow. The transformation of Doreen is so heart wrenching and gut churning that I couldn't stand it. She truly becomes a soulless monster.

Heidi is one of those characters you love to hate. She is controlling and cold, and yet the author gives her a tattered past with scandalous secrets that make you root for her. After finishing the book, I'm inclined to believe that she is the true main character, for she makes an amazing journey and finally makes a choice that leads her into her future. (So does Doreen, but her future is not certain.)

There are a lot of point of view switches and sometimes I had to backtrack to see what character's head I was in. They were often random and sometimes you jump into the head of a minor character. Overall, I found this book morbidly fascinating. I couldn't stand the way the characters treated each other, but kept reading because I hoped at some point justice would be served, and Doreen's secret revealed. I'm giving this one 4.5 stars, and I can't even tell you fully why, just that the book was engrossing.