Middle Grade time! Today I am looking at book 2 in the Mysteries of Cove series, Gears of Revolution, by J Scott Savage. Right now it is avavilable for pre-order. It just released! 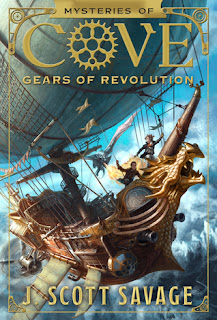 Trenton and Kallista are ready to explore the world outside of Cove and look for Leo Babbage, Kallista's father. Using their mechanical dragon they begin looking for clues he may have left as to his whereabouts. The outside world is dangerous, and the two must learn to use their dragon to both fly and fight.

After find a shimmering lake and parts to a compass, the two use the clues to head towards Seattle. When they arrive all they find is a blackened whole in the ground and a large green dragon whom they take down to survive. Further examination leads them to the discovery of an underground city with hundreds of survivors. Survivors who worship the dragons and think the green dragon is their protector!

Captured, Trenton and Kallista are saved by the dregs of the underground city, the Whipjacks. They are put to work as builders and engineers and discover that Kallista's dad was once there. Now they have to escape and follow him, but while planning, they learn that the dragon worshippers are planning an attack on Cove.

I was pleasantly surprised by this sequel. When I finished book one, I wondered how the author would be able to continue the series in a like manner. Book one was a treasure hunt through Cove with Trenton and Kallista finding clues left by Babbage, and eventually the plans to build the mechanical dragon. It was so much fun to discover the mysteries of Cove.

This book followed right along, yes! Trenton and Kallista use clues left by Babbage to first, discover where to travel, and then to figure out how to plan an escape from Seattle. The plot is well done, with clever puzzles and great tension. Plus, we are introduced to a great, new character- Plucky. A Whipjack girl with spring legs.

Great storytelling, another engaging mystery, and tons of action! 5 stars!