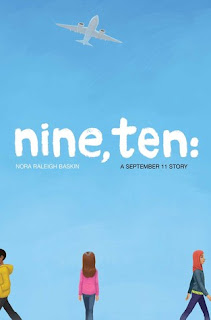 The Story-
This is the story of four pre-teens and their involvement with Sept. 11th. Sergio, who lives in Brooklyn, is struggling to come to terms with the absentee father he hates and the grandmother he loves. Will’s father is gone, too, killed in a car accident that has left the family reeling. Nadira has never before felt uncomfortable about being Muslim, but at her new school she’s getting funny looks because of the head scarf she wears. Amy is starting a new school in a new city and missing her mom, who has to fly to New York on business.

Their lives intersect twice, at the beginning and the end of the story, but their tales are interwoven.

My Thoughts-
I wanted to share this story in honor of 9/11. The book itself focuses on the 48 hours before Sept. 11th and then 1 year later. The interweaving of Sergio, Will, Nadira and Amy is done exceptionally well and is a small peek into four lives that will allow kids to view different life styles and situations. Each character is well written, with deep emotions and voice.

I found it odd that no one involved with the children actually dies in the attack, but then when I read the afterward, the author says she did this on purpose, feeling it was the way to go with this particular story. It was nice to see that this was deliberate and not a flaw of the plot. Involving the actual 9/11 attack, the author does a great job in revealing it through the eyes of all four kids. It is written specifically for a middle grade audience.

My one critique, at the end of the story, one year after the attack, the four kids semi-intersect at the 9/11 memorial, and the focus is spotlighted on Nadira and her family. An angry, white male, carrying an American flag antagonizes them and people around them step up to support the Muslim family. My issue, the author has done a great job with not allowing stereotypes to take root. The whole theme focuses on America as a whole dealing with the tragedy, but then she uses a stereotype herself to be the villain. She could have easily gone with a grumpy man, but she had to make him an angry white man. Totally pressing into the minds of kids that the angry white man is what is wrong with America. It took the anger of the terrorist attack and suddenly moved it to the angry white male stereotype.

Anyhow, up until that point, I really enjoyed this story. It was open to many viewpoints and showed the 9/11 tragedy in several different ways. 4 stars!