YA Friday! Today I am reviewing a find I discovered on sale just this week on kindle- Altered by Jennifer Rush. 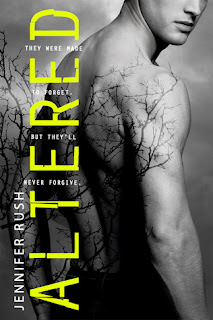 Seventeen year old Anna has spent the last four years working with her father in his top secret lab underneath their farm. She is in charge of entering data obtained from the four young adults imprisoned there: Sam, Trev, Nick and Cas. Over the years she has developed a deep relationship with each; Sam being her crush, Trev her best friend, Nick her enemy and Cas the clown.

When The Branch decides to take the boys away, her father helps them all escape and sends Anna with them, charging Sam to take care of her. Sam is the only one who has a slight memory of who he used to be and so they follow clues to dig deeper into who the young men were and what experiments might have been done to them.

But, all is not what it seems and if they can't figure out the truth, they will be separated, permanently.

My Thoughts-
I'm glad I took a chance when this bargain came my way. The base story itself is not so unique- Amnesia, top secret government experiment, super soldiers, however the search for the truth behind the four boys and Anna is the real page turner.

Anna is by far my favorite character. She has been raised by a single dad obsessed with work. She is home schooled and doesn't seem to have any friends besides the boys. No wonder she grows attached to them. What really pulled me in was her desire to remember her mother. She treasures this book of  recipes that her deceased mom made, drawing a connection by including her own recipes and drawings inside it.

Sam is the love interested, and really, he is hard to understand. He is the leader of the group and remains remote. I wish the author had given us more to like about him. Maybe some hints of feelings for Anna before the climatic end.

Of course there is a big twist, and I actually didn't see it coming. I think I was so focused on the Anna and Sam relationship that I missed hints from the author. I think young adults will enjoy this beginning of a series. It is a thriller with hints of romance and sci-fi. 4 stars!