Middle Grade Monday is moving to a new blog headquarters- Always in the Middle... by Greg Pattridge. For a list of all the blogs participating go to his site every Monday. Of course, I will still continue to  participate! 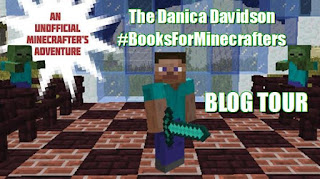 Welcome to this stop on the Danica Davidson Minecrafter blog tour! Today I am reviewing her latest book, Adventure Against the Endermen. 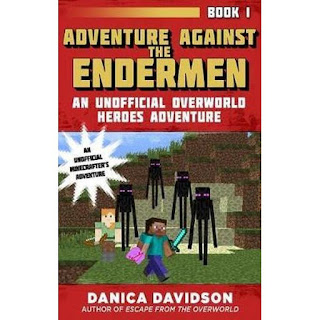 Stevie and his dad Steve are called to town to help with some random disappearances. While his dad investigates, Stevie takes on a dare to jump over a pit in a nearby mountain. However, he ends up falling down a mine shaft, battling an Endermen, and then finding a purple crystal in a sealed room.

Back in town, things are getting worse and more people are missing. Mayor Alexandra arrives announcing that the same thing is happening in her town too! She wants Stevie to get his friends from Earth and help figure out what is happening.

Stevie agrees, but is troubled when he keeps hearing a creepy voice in his head. Now,  Stevie, Alex, Maison, Yancy, and Destiny join together and battle Endermen. They realize that the Endermen are coming after Stevie's crystal, and that if he uses it as a weapon against the Endermen they are either destroyed are turned into the missing villagers! Well, that mystery is solved, but who is the creepy voice and how is she controlling the Endermen?

My Thoughts-
This is a fun read that children who love the game Minecraft will enjoy. This is the first time I've read a Minecraft book, though my son has several, so I can't compare it to others. Instead, I'll just give you my thoughts about this one read.

It is a very easy read, almost two dimensional, and then I realized, aha! it is just like the game. Events happen matter of factually and there is not much character development, but, the characters do things just like they'd do in the game. The characters are on an adventure, they fight the bad guys, figure out the clues, and then save the day. There is action and adventure, tension and mystery. I really think young readers will get a kick out of the story, especially because the villagers are turned into Endermen, something that hasn't been done before.

I think this book will find a place with reluctant readers and create a desire to read the rest of the books in the series. I'm giving it 3.5 stars!