Welcome to Middle Grade Monday! Today I have a review and a GIVEAWAY for you. I'm taking a look at book two in the Children of Exile series by Margaret Peterson Haddix, Children of Refuge. My giveaway is for the first TWO books, Children of Exile and Children of Refuge. To check out my review of the first book- CLICK HERE. To enter, fill out the rafflecopter form below. If you don't see it click, 'read more'. As always, don't forget to head over to MMGM Central to see all the other middle grade blogs-  Always in the Middle... by Greg Pattridge. 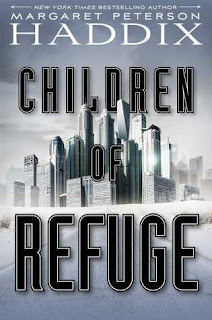 This story focuses on Edwy, Rosi's friend from the first book. Edwy is sent by his birth father, in the dead of night, to Refuge City. He is told that once there he will be living with his older brother and sister. This is a shock to Edwy for he is used to being the oldest kid from Fredtown and he didn't know he had siblings.

Once there life is strange. Even though he has always been a rule breaker, he can't seem to understand why people live the way they do in the city. Why they aren't kinder or more helpful? He begins to fit in with his brother's friends, but only by cheating. His guilt leads him to seek out other children from Fredtowns. He is also desperate to find out what happened to Rosi, whether she was captured or not?

His findings lead to some shocking discoveries, and soon it is up to him to convince his selfish brother and sister to risk their lives for someone they don't know, and take him back to rescue Rosi.

My Thoughts-
It was very interesting to read this book from Edwy's point of view. Up until now it had all been Rosi, and Edwy was just the rule breaker that challenged the Fred's. Now, we see inside his thoughts and actions. Though still a rule breaker, we see that he truly is not cruel in his ideas and that like a small child, he likes to  protest and stir the pot. As soon as he sees injustice in Refuge City, it bugs him and he begins remembering all the things the Fred's taught him.

As he realizes that he is beginning to sound just like Rosi, his thoughts turn toward his lost friend and he begins to seek out the truth about the aliens and what had happen to all the children in Fredtowns. As readers, we are able to dive more into the inner politics of what happened during the war and see how the Enforcer aliens are trouble for one and all. The question is raised, should all of the children have been taken away or just those who had parents that would not have raised them as humanitarians?

Though engaging this book wasn't as fun as the first, probably because the mystery of Fredtowns and aliens was so huge in the first book. However, I did enjoy diving into the characters in this book, seeing how people on Earth treated each other, what had caused the war in the first place, and how the planet coped with their children being taken away for twelve years. It is a good read full of depth and I'm giving it 4.5 stars!