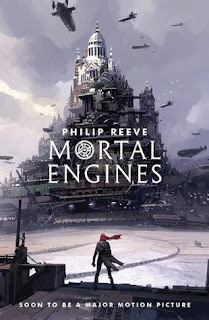 Today's YA Friday choice is brought to you because of a movie trailer. Perhaps if you've been to the movies lately you've seen the one about a big city rolling around on wheels? I couldn't help but be intrigued when it mentioned it was based on the book Mortal Engines by Philip Reeve. I'm a sucker for snatching the book up before seeing the film. I downloaded the Kindle copy right in the the theater.

The Story-
Tom is a junior historian in the city of London. It is a thousand years since humanity almost destroyed itself in a sixty minute war, and now all cities are built on huge traction machines that roll over the earth and snatch up smaller traction cities.

Tom is sent down to the guts to look for artifacts after London eats a mining town. While there he is surprised to see his idol, Valentine, head historian and archaeologist of London. Things turn bad when one of the mining town survivors charges Valentine and tries to kill him. Tom runs after the villain, amazed to see that it is a young woman with a scar down the side of her face and a missing eye.

Through different means, they both end up expelled from the city and for the first time Tom finds himself on real ground. Together Tom and Hester try to find their way back to London, Hester to finish her murder and Tom just to get home. However, along the journey Tom learns the truth about his idol Valentine and the ugliness of living in a city eat city world.

My Thoughts-
This book scores points for originality. The idea of an entire city, as big as London, rolling around on traction wheels and getting their supplies by eating up lesser cities and stripping them bare, blows my mind. I honestly would not have been able to picture it if it hadn't been for the movie trailer. Whether it is in any way realistic is another story, but since this is a fantasy/dystopian novel, I'll let it roll.

Let's talk about our main characters, there is actually a quad, Tom and Hester and then Katherine (Valentine's daughter) and Bevis (a junior engineer). Tom and Hester are working their way back to London, discovering flying airships and other mini cities along the way. They also learn of the resistance movement against traction cities. Katherine and Bevis both live in London. Katherine is disillusioned by facts she finds out about her father and Bevis knows the secrets of the engineers and the robots and deadly weapon that are being built. Together they try from within London to stop the insane mayor from destroying the world.

The plot is full of twists and turns and as a reader I was eager to find out what the world was like that Hester and Tom lived in. It was also interesting to see technology from our current day have such an impact in the future. There is great tension and build up and the ending scenes are full of action. I enjoyed my ride through this novel. However, I felt as if something were missing. Tom and Hester are great characters, but there is nothing very special about them. I wanted there to be something that only Hester or Tom could accomplish that would save the city or world. Some type of hidden hero archetype or unknown skill that surfaces. I needed to feel that this same adventure could not have happened to any other two kids.

So, overall I recommend this book for its originality and action and I'm giving it 4 stars!