As Black History month opens, I have a great selection to share! This first-ever picture book biography of Carter G. Woodson emphasizes the importance of pursuing curiosity and encouraging a hunger for knowledge of stories and histories that have not been told. 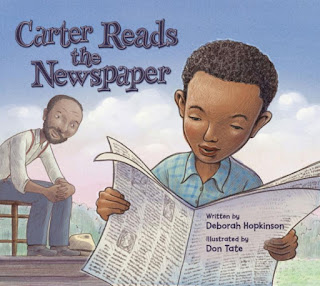 Each year, we celebrate the lives of Martin Luther
King Jr., Harriet Tubman, and many other famous
African Americans. Yet there are many African
Americans throughout history who have made great
contributions we know nothing about. This is the
story of one man, Carter G. Woodson, and his
commitment to learning, truth, and the creation of
Black History Month.

Carter G. Woodson was born to two formerly enslaved people ten years after the end of the Civil War. Though his father could not read, he believed in being an informed citizen. So Carter read the newspaper to him every day. When he was still a teenager, Carter went to work in the coal mines. There he met a man named Oliver Jones, and Oliver did something important: he asked Carter not only to read to him and the other miners, but also research and find more information on the subjects that interested them. “My interest in penetrating the past of my people was deepened,” Carter wrote. His journey would take him many more years, traveling around the world and transforming the way people thought about history.

Carter eventually went back to high school and
then to college and graduate school. He was the
first and only Black American whose parents
had been enslaved to receive a doctorate in
history. Is it hard being the first to achieve
something? Can you achieve something that
your parents and grandparents were unable to
do? What do you want to do or be that your
family has not been able to do?

• One of Carter’s professors said that Black
people had no history. Carter disagreed. Why
would the professor believe this? Is it possible
for a person or people to have no history? How
would you go about proving you had a history?
What is racism? Do you think racism had
anything to do with the professor’s beliefs?

• In 1926, Carter established Negro History Week,
which eventually became Black History Month.
He chose the week of Frederick Douglass’s and
Abraham Lincoln’s birthdays. Why did Carter
choose to honor these two men in this way? If
Carter were alive today do you think he would
choose the same men to honor, or would he
choose others? What two people from your own
heritage would you choose to honor and why?

• “Carter G. Woodson didn’t just study history.
He changed it.” How can a person change
history when history is the past? What can you
do to change history today? Are you going to
try?

Buy it Now-
AMAZON
Posted by Dorine White at 5:00 AM