As Black History Month comes to a close, I have a great picture book for you, Fighting for Justice
Biddy Mason Speaks Up by Arisa White & Laura Atkins, Illustrated by Laura Freeman. To enter the giveaway please fill out the rafflecopter form. Terms and conditions apply. 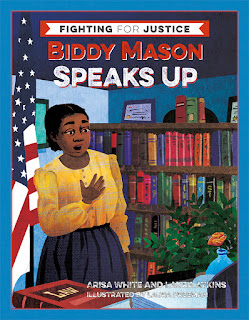 Another real-life champion for Civil Rights: Bridget "Biddy" Mason, was an African American philanthropist, healer, and midwife who was born into slavery. But she knew that her enslavement did not define her; during her life, Biddy stood strong for herself and many others, fighting injustice to build her community. Later in life, she made her own fortune to become a wealthy woman.

The second book in the Fighting for Justice series, Biddy Mason Speaks Up is an age-appropriate yet unflinching examination of slavery, racism, and community healing in the United States. Incorporating a fusion of multiple formats to convey information and imagery, the book engages readers from the first page. Each chapter begins with lyrical verse and full-color illustrations that draw readers into the narrative, and is followed by visually engaging sections filled with keyword definitions, historical context, timelines, and primary sources. Coauthors Arisa White and Laura Atkins devote much of their narrative to Biddy Mason's later life as a business and civic leader in the fledgling city of Los Angeles. Throughout the book, the authors pose questions to the reader, such as "How do you see power at work in your community?" making Biddy Mason's story all the more relatable to the present day.

Image Awards, California Book Awards, and more. Her recent poetry collection, You're the Most Beautiful Thing That Happened, was a nominee for the 29th Lambda Literary Awards. As the creator of the Beautiful Things Project, Arisa curates cultural events and artistic collaborations that center narratives of queer and trans people of color. She is an assistant professor at Colby College. ArisaWhite.com
Photo Credit- Nye'Lyn Tho

with over twenty years of editorial experience, helping to produce winners of the Coretta Scott King Award and American Library Association Notable Book selections, among others. Passionate about diversity and equity in children’s books, Laura is based in Berkeley, California, where she lives with her daughter. LauraAtkins.com

Biddy Mason Speaks Up is the second book in the Fighting for Justice series, how was the subject selected? Were you familiar with Biddy Mason before taking on this project?
AW: I had no familiarity with Biddy Mason prior to being asked to take on this project. Once I did my intital research, I wondered why I didn't know about Biddy Mason before. Why are some people more highlighted in history than others? So writing this book became my own education--because so little has been written about Biddy Mason, her life taught me more about enslaved children, midwives, herbal medicine, Mormonism, the Constitution, Amendments, the pioneer society of Los Angeles. I then noticed, with greater clarity, the various ways our lives are bound by time and place, laws and politics, and shifting belief systems that impact who is deemed human and therefore worthy of recognition.
LA: I had not heard of Biddy Mason before, which seems incredible given how much she connects to so many parts of our country’s history, including the establishment of California and Los Angeles. I only encountered her name and history when I became a part of this series. Stan Yogi had selected the initial people to include, inspired by the book he co-wrote with Elaine Elinson, Whereever There’s a Fight: How Runaway Slaves, Suffragists, Immigrants, Strikers, and Poets Shaped Civil Liberties in California (Heyday Books).

How long did it take to write this book, and how did you two determine the best way to split up the writing?
AW: It took nearly two years—twenty-two months. I started drafting the poems because that determined the content for the insets. Then once the poems were stable, I focused on gathering material for the first six insets and Laura did the last. Then we would go back and forth--sometimes including our editor Molly Woodard in the process--amending, revising, editing, and correcting all information.
LA: Stan and I went to do research at UCLA’s Biddy Mason collection in March of 2016 when we finished working on the Fred Korematsu book. Soon after that Stan decided to step back and pass the baton. He said he had never aspired to be a children’s book author, and wanted to work on different writing projects. He also said he felt like he needed to have a PhD in each subject, based on the format of the book. I naively said – you just draw on other researchers – how hard can that be? And I proposed to Heyday that I co-write each book with someone whose lived experience connects to the story being told. I did a small selection process to find a co-author. Arisa and I started working together in August 2016 and we finished and delivered the book in April 2018. So depending on how you slice it, that was between one and two years of work.

Because Arisa is a published poet for adults, it made sense to have her take the lead on the poetry section. But as I write above, it really was a collaborative writing process with lots of conversation along the way.

What kinds of books were you drawn to when you were in middle school or high school? Please share a few of your favorite books from childhood and why they resonated for you.
AW: During the summers in junior high, I read whatever was around the apartment, which were mostly my mother’s books: Annie John, by Jamaica Kincaid; Waiting to Exhale, by Terry McMillian. Sometimes I would walk down to the Brooklyn Promenade, where a man would sell books, and there I picked up Fahrenheit 451; I loved reading The Pearl and Of Mice and Men, by John Steinbeck; and in high school, the books I vividly recalled were The Bluest Eye, by Toni Morrison, Go Ask Alice, Drown, by Junot Diaz, Down These Mean Streets, by Piri Thomas, and Cures: A Gay Man’s Odyssey, by Martin Duberman. All these books had memorable characters, people whose struggles I could relate to, whose vulnerability help me become more emotionally expressive, whose identities mirrored my own, and whose social and political circumstances helped me locate my own routes of freedom.
LA: I loved scifi and fantasy. My favorite books were the Prydain series by Lloyd Alexander, The Phantom Tollbooth by Norton Juster, and later, the books of Kurt Vonnegut. More recently I fell in love with the speculative fiction of Octavia Butler. I haven’t yet turned my hand to writing fantasy, but may do so when I have more confidence as a writer.