Middle Grade Monday Time! How about a book from way across the ocean? Let's check out Foiled by  Carey Fessler. It's the first in a series of adventure books. 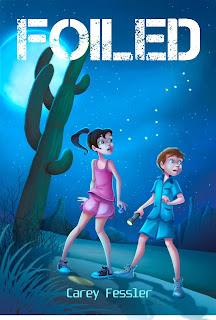 It’s 1947 on a U.S. Army base near Roswell, New Mexico, and eleven-year-old Kate’s friend and neighbor, Billy, shows her a secret. A CIA agent arrives at Billy’s house, to recover the Top Secret items, and threatens the family, warning them to never talk about the incident—ever! Special Agent Falco informs them of their sudden reassignment to Germany. Billy, not wanting to move to Germany or return his treasures, begs Kate for help. Feisty and fiercely loyal, she agrees to hide him.

Thus begins a most unusual road trip in which the two friends use their wits, their knowledge of the terrain and geography around the base, and sheer determination to evade capture. Kate must also reach her grandfather, more than two hundred miles away, and warn him of a dangerous threat … to anyone involved.

Their race has begun, and there’s no turning back

I grew up in a military family and moved around more often than a gypsy. My favorite smell is green, favorite flavor is mist, and favorite day of the week is Funday. I wonder if fish wish they could wink and trees wish they could walk. I think it’s bizarre that your belly button harbors more bacteria than there are birds in Borneo. I believe biographies are boring and think it’s fun to speak in silly-sounding sentences with wacky words that start with the same letters. I live in the city of rain and thunder in the land Down Under, which is home to koalas, kangaroos, and kookaburras—a kingfisher. Finally, I believe in exercising your imagination and secretly staying up past your bedtime.

1. Tell me about your book in your own words.
Foiled is a Middle Grade pacey, page-turning novel set in 1947, featuring the famed Roswell UFO crash incident near Roswell, New Mexico.

The title Foiled has three meanings:

1.     Foil: noun- referring to the ‘magic foil’ (piece of thin metal sheet) in the story, which is a piece of alien technology from the crash site of a UFO. On the front cover, you can spot the girl holding it in her hand. ;)

2.     Foil: noun- The two MCs contrast each other and so emphasize and enhance the qualities of the other.

2. Tell me about living in Australia and how it might encourage or affect your writing?
I grew up in the States—mostly in New Mexico—as an Air Force brat and presently live in the city of rain and thunder in the Land Down—Melbourne, Australia. Living in Oz over the last several years inspired me to write my latest body of works—an MG sea-island Adventure trilogy: Shanghaied, Shipwrecked, and Sea Raiders that is set in the “Top End” of the country—Darwin, Australia.

3. Why a pen name?
I use the pen name Carey Fessler to honor the two people who encouraged me to read as a kid—my grandparents: My G’ma’s maiden name is Carey and my G’pa’s last name is Fessler … Carey Fessler worked perfectly.

4. What were your favorite kid books as a child or teen?
As a kid, I liked the mystery series by Jerry West, The Happy Hollisters, and loved the many Adventure series by Enid Blyton like The Adventurous Four, and also anything by Jules Verne like 20,000 Leagues Under the Sea, whose work heavily influenced steampunk. As a teen I shifted to Action novels like Ice Station Zebra by Alistar MacLean as well as WWII submarines novels like Run Silent Run Deep by CDR Edward Beach.

5. Why would kids love to read your books?
Kids from ages 9 to 99 would love to read my books because of the pacey, pages turning writing style, the cheeky humor and dialogue, as well as the action and suspense. But more importantly, readers will become emotionally invested with the engaging and endearing characters. When young readers care about a character(s) it helps teach them empathy. Foiled also gives the female reader a sense of empowerment, knowing she can make a difference in her world.

Adults are constantly telling children what they can and can’t do. I set out to write a story about a gutsy eleven year old stumbling over endless physical and mental pits, picking herself up, and pushing herself on to discover for herself what she can do. I also wanted to ask, “Would an eleven-year-old stop at the established limits set by the grown-up world to save her friend and family, or would she break those limits?”


I’m hoping to turn kids onto reading by sparking their imagination. Albert Einstein said, “Imagination is intelligence having fun.”