The Sidewalk's Regrets- YA Author Interview with Kate Larkindale

Today I am taking a look at a new YA release from Evernight Teen, The Sidewalk's Regrets by Kate Larkindale. 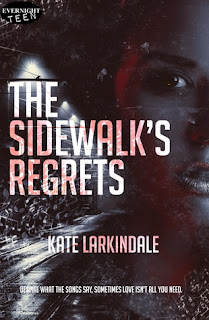 (blurb) Seventeen-year-old Sacha McLeod isn’t looking for someone to rock her world. She just needs a new violin string to replace the one she broke while practicing her audition piece. But when she hears the boy in the music store play guitar, the energy, violence and unpredictability of the music thrills her and she falls hard for Dylan and his wild, inventive sound.

As their attraction heats up, Sacha finds herself spending less time with her violin and more time with this exciting guy who makes her feel things she’s never imagined. Her plans for her violin-virtuoso future - and her self-confidence – are shattered when she screws up the audition for a prestigious summer music program. Failure isn’t something she’s had to face before, so when Dylan asks her to spend her vacation with him in the city, she lies to her parents, pretends she won a place in the summer school, and secretly moves in with Dylan. She’s expecting romance, music and passion, but when she finds herself playing second fiddle to Dylan’s newly acquired drug habit, she realizes despite what the songs say, sometimes love isn’t all you need.

Desperate to understand what’s competing with her for Dylan’s affections, she joins his band and does drugs with him -- just once. But once become twice, three times, and more. As the band's popularity grows, so do the pressures and her drug use escalates. If Sacha can’t figure out how to leave the band, and Dylan, she’ll lose herself and her own music forever.

Having spent a lifetime travelling the globe, Kate Larkindale settled in Wellington, New Zealand fifteen years ago.  A film marketing executive and mother to two sons, she’s surprised she finds any time to write, but doesn’t sleep much.  As a result, she can usually be found hanging out by the nearest espresso machine.
She is the author of contemporary YA novels The Sidewalk’s Regrets, An Unstill Life and Stumped along with several others that no one is allowed to see. Yet. She has also written one very bad historical romance, which will likely never see the light of day. She is working on several more YA novels that may or may not ever be finished.

Her short stories have appeared in Halfway Down The Stairs, A Fly in Amber, Daily Flash Anthology, The Barrier Islands Review, Everyday Fiction, Death Rattle, Drastic Measures, Cutlass & Musket and Residential Aliens, among others.

The Interview-
1. Tell me about your book in your own words.

It’s a very personal story, based on what I’ve observed happening to far too many bands and musicians I’ve cared about over the years. It’s alarming how many of the same mistakes people make…

It’s about a talented violinist, Sacha, whose world is completely rocked when she meets Dylan, the guitarist in a rock band.  When her plans for her future don’t pan out exactly as she saw them unfolding, she throws everything into loving Dylan – sharing everything she has, including her music.  In return, he shares his newly acquired drug habit.  As things start spiralling out of control, Sacha discovers that despite what all the songs say, sometimes love isn’t all you need.

2. Is there a message you wish to convey with this book?

You know, while I was writing it, I didn’t think I was trying to convey any kind of message.  It was only later, once I was going through the editing process that I realized how many messages I’d thrown in there.  There’s one about addiction, and how anything can become additive if you let it – a feeling, a person, an activity.  And then there’s one about not letting someone you care about become your sole focus.  Just because you love someone, doesn’t mean you have to become them or even be with them all the time.  You can still be your own person with your own dreams and talents and ideas.  And finally, there’s the hardest one for anyone to learn: sometimes you can’t stay with someone even when you do love them.  Sometimes love can be destructive or stifling or holding you back from being what you are meant to be.  Recognising when a relationship can’t continue is difficult, and leaving someone you love deeply even more difficult, but sometimes it’s the only way to survive.

3. Tell me about your writing process.

I’ve written 14 novels now, and the process has been slightly different for each of them as I’ve discovered things that work for me and things that don’t.  Basically I’m what they call a ‘pantser’, in that I don’t outline before I start writing.  I often don’t even start writing at the beginning of the book.  Usually I have one scene that’s desperate to be written, so I write that and see where it takes me.  I usually also have a pretty good idea of an ending, so I write that too, so I have somewhere to aim for.  And then I fill in the rest.  It’s not a process that will work for everyone, but I don’t think there is any ‘right’ way to write a novel.

4. What advice would you give to up and coming authors?

Just write.  Don’t think about publishing while you write.  Just write the book you want to read and enjoy it.  You can worry about the rest when you’re done.  And by done I mean written, revised, revised again, critiqued, revised, beta-read, revised and polished.  Writing a first draft is just the first step, but it’s the most important one.  So get your butt into that chair and write.