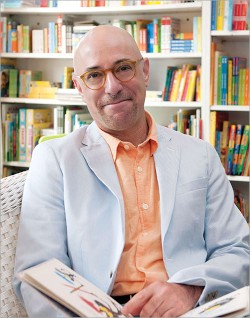 Anthony Biancella, 2012
Arthur Levine.
“Scholastic has announced that Arthur A. Levine, widely known as the editor who brought J.K. Rowling’s Harry Potter series to the U.S., will be leaving to start an independent publishing company as of March 30.”

Though his new publishing house does not have a name, it does have a focus. “Levine said the list will “center on diversity, ideally with a mix of 75% minority creators, including people of color, indigenous people, and LGBTQ individuals.”

Read the full story at PW
Posted by Dorine White at 10:39 PM