Welcome to YA Friday! Today I am reviewing a new YA Sci-Fi release, Breed, by Niki Cluff. The author is offering 1 ebook to a lucky reader. Fill out the rafflecopter form to enter. 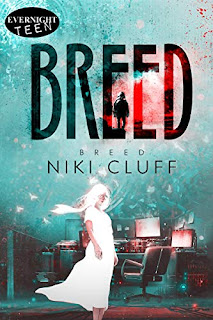 A comet is set to destroy Earth, but Kyle Singer is determined to survive.

Tired of being treated like a second-class citizen thanks to her perfect brother, Kyle doesn’t think twice when offered the opportunity to attend an academy formed to stop the comet. It’s not like there’s going to be much left after the comet hits, anyway.

She's drugged, shipped off to the school, and thrown into a relationship with Ichiro Seung-hun, an exchange student from South Korea. The school isn’t just about stopping the comet. It’s a breeding program for after the comet hits and wipes out the human race. Terrified of becoming a baby-making factory, Kyle and Ichiro will do whatever it takes to escape.

Even if that means dying.

A nice end of the world book with tension and action. Kids picked to be saved as part of a breeding program and forced to live together. But Kyle and Ich are different, they have intuitive powers that make them special.

I didn’t find it hard to believe that there would be a survival program based on genes and intelligence. It seemed odd to me that everyone was in such a shock over it. It wasn’t until the end when you figure out they’ll be used over and over again with no say, that I realized the evil intent. I thought they were just saving couples and would let them get together and have kids. Nope, forced pregnancy with in vitro.

My one critique would be the main character's name. Her name is Kyle, and everytime I read it I was thrown out of the story. There is just no way I see Kyle as a female name. It's not like Sam or Pat. So, I started pronouncing it in my head like Kylee, boom, problem solved.

I’m excited for a second book. I want to see what is left of the world after the comet and how our two heroes will survive. I love survival, end of the world books. I give it 5 stars!