What We Buried by Kate A. Boorman

Welcome to YA Friday! To I am reviewing a new YA thriller, What We Buried by Kate A. Boorman. 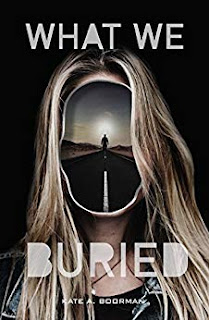 Liv wants to gain emancipation from her parents. She blames them for years of psychological abuse for making her do beauty pageants as a child. Jory, her brother, just wants Liv to finally realize that the world does not revolve around her. At the courthouse, Jory is shocked when his parents vanish. Liv thinks it is a stunt, but Jory swears they were there.

Liv thinks their parents are hiding out at an old house by a lake, and she convinces Jory to come with her to look. As they drive strange things begin to happen. They end up on an endless loop of road, their cell phones stop working or they find weird messages left, and then  their car gets stolen, only to return a few hours later.

When they finally make it to the lake house, neither Liv nor Jory know what they'll find, but it isn't what either of them expected.

Holy Twilight Zone, Batman! This book really takes the reader for a ride. Told from both Liv and Jory's points of view, the story grows weirder and weirder. I couldn't figure out what was happening, but the idea of finding out dragged me along. So many strange incidents occur, and you figure out there's an issue with time and reality, but how and why is it happening?

I kept reading to the end, but then I was like, say what? HERE COME THE SPOILERS...
The courthouse scene at the beginning of the book makes no sense if the end reality is true. Plus, despite all the abuse, we are supposed to belief that Liv and Jory burned their parents alive? That the shock of doing it caused them to live in some type of singularity until they were able to come to terms with their actions? And then we're supposed to be happy they get off scott free and disappear to wherever?

The story left me with an uncomfortable feeling of yuck. I enjoyed the strange events and time loops and I was eager to find out what was happening and what would be at the cabin, but then I just don't think it lived up to the cool things that sort of, but not really, happened on their car trip. I can't say I hated the book, it was interesting and it kept me reading. I'm going to give this one a 3, because I think some readers will enjoy it and others will feel like I do now.