*Don't forget to enter the giveaway for the Hello There Trilogy*

Let's check out The Last Last Day of Summer by Lamar Giles. Don't forget to check out MMGM central at https://gpattridge.com/ 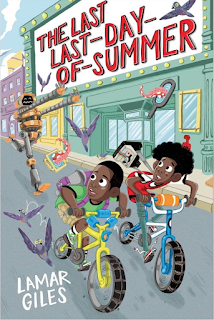 Otto and Sheed are the local sleuths in their zany Virginia town, masters of unraveling mischief using their unmatched powers of deduction. And as the summer winds down and the first day of school looms, the boys are craving just a little bit more time for fun, even as they bicker over what kind of fun they want to have. That is, until a mysterious man appears with a camera that literally freezes time. Now, with the help of some very strange people and even stranger creatures, Otto and Sheed will have to put aside their differences to save their town—and each other—before time stops for good. 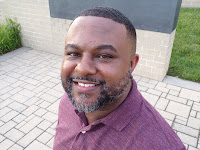 Lamar Giles is a well-published author and a founding member of We Need Diverse Books. Lamar has two novels forthcoming in 2019: his debut middle grade fantasy THE LAST LAST-DAY-OF-SUMMER (Versify / HMH) and his fourth YA thriller SPIN (Scholastic).

1. Tell me about your book in your own words.
LG: THE LAST LAST-DAY-OF-SUMMER stars The Legendary Alston Boys of the supernaturally weird Logan County, Virginia. There’s Otto, a loving know-it-all, and Sheed, who’s sometimes cranky, but always cool. When they’re tricked into freezing time on the last day of summer by the mysterious Mr. Flux, they unleash a bunch of weird creatures they either have to align with, or battle, to save the day. It’s like the Hardy Boys crashed into THE PHANTOM TOLLBOOTH.

2. How do you think your book will relate to kids in today’s world?
LG: The novel is about the universal desire to make fun times last, and how that’s something that can never really happen. Every child who has felt that first day of school rushing toward them as summer ends will understand Otto’s desire, but they will also see that ‘making summer last’ is really a ‘be careful what you wish for’ scenario.

3. Is there a message you wish to convey with this book?
LG: Enjoy the time you have, because none of us get more of it.

4. Tell me about your writing process.
LG: Overall, I tend to imagine a general concept (“what if a pair of boys somehow froze time?”), then figure a loose conclusion that would wrap that scenario up. Once I have those two things—the beginning and end—I tend to fill in the middle on the fly. Then, the way that looks on a daily basis is I’m up by 6 AM every morning when I try to write anywhere from 4 to 6 pages daily until I have a full, rough draft.


5. What were your favorite books to read as a child or teen?
LG: Horton Hears a Who! by Dr. Seuss, The Phantom Tollbooth by Norton Juster, The Celery Stalks at Midnight by James Howe, any of the Choose Your Own Adventure books. In my teens there was Fear Nothing by Dean Koontz, The Tomb by F. Paul Wilson, My Soul to Keep by Tananarive Due, and IT by Stephen King.

6. What advice would you give to up and coming authors?
LG: Practice finishing. This doesn’t mean that you won’t ever abandon a project, but dumping an idea should be the exception, not the rule. Practicing writing and completing projects when they start to drag will be one of your most useful skills when you’re on deadline for your publisher one day.

7. What was your path to publication like?
LG: I’d been writing since I was a kid, but got serious during my last year of college. It was easy reasoning for me—a day job sounded hard, and publishing sounded hard. I HAD to get a day job, but I should at least put some energy into the hard thing I actually WANTED to do. So I spent the years between age 22 to age 30 writing, submitting, getting mostly rejected, but improving the whole time. At 30 I’d completed a draft of a novel called WHISPERTOWN that got me an agent, and that book later sold to Harper Collins and was published as FAKE ID in 2014. I’ve been lucky enough to have published four novels and an anthology I edited since then, with a lot of upcoming work on the horizon that I’m extremely grateful for.