Girl of Glass by Megan O'Russell

Welcome to YA Friday! Today I'm reviewing a YA fantasy that I picked up as a daily deal. I love when books are free. Let's check out Girl of Glass by Megan O'Russell. 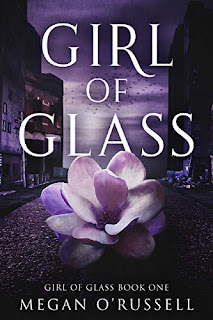 Nola lives behind a glass dome, one of several across the country. The domes protect the people from the toxic air of the land beyond. Too bad the plan never meant building domes for everyone. The people that have been left to live outside the dome live with acid rain, poisoned air and contaminated soil.

Nola grew up with a close group of friends, one that was broken up when her best friend and potential boyfriend, Keiran, was exiled with his father from the dome. She hasn't seen him in two years. During a charity trip to "help" people outside the dome, Nola runs into Keiran, who begs her for medicine to save a young child.

Now that Nola knows Keiran is alive, she risks her life to sneak out of the dome and find him. What she discovers is an underground world run by Vampers. People who have taken the Vamp virus to help their bodies survive in a toxic world. On the streets above, along with dying humans, are Lupers, people who have taken a distorted type of the virus that makes them more werewolf than human, and then of course, there are the zombies, people the virus completely messed up.

Nola gets to know the Vampers, understanding why they have chosen to risk taking a virus in order to stay alive. Keiran's father is a doctor, and he is re-engineering the Vamp virus so that it doesn't have so many side effects. Keiran was the first person he had to save, and now he is a blood drinker too, but one that kept his humanity.

A battle between the outsiders and the Domers is building, and Nola is stuck in the middle. Will Nola choose her old boyfriend Keiran or the Dome?

My Thoughts-
Great book that introduces a new way to look at vampires, werewolves and zombies. The dome concept is not new, but what the people have done to survive in the outside world is. The virus that was created changed humankind genetically, actually making blood drinking vampires and pack hunting wolves.  This is a great twist on an old tale. Keiran's dad is now changing the original virus so that it can save people, but leave them their humanity, their old selves. This is how Nola and Kerian now have a new chance. And, SPOILER, while Nola is with the Vampers she gets injured, and the doctor is forced to give her his new Vamp virus to save her. He doesn't turn her, but she heals super fast. I really hope this leads to her being somehow super human in the second book.

There is also a great love triangle that keeps things interesting. Back in the dome, one of the boys Nola has grown up with, Jeremy, is in love with her. While Keiran was thought lost, she has let a bit of relationship bud between herself and Jeremy. He is a great young man who is clearly devoted to Nola. So, when Nola gets together with Keiran again, she is pulled in two different ways, and there is no easy way to choose. Both guys are good guys. And that's what I love about it. I hate when authors make one love interest have so many flaws that it is obvious who the main character needs to be with. Here, the reader is going to go on an adventure as Nola picks.

I enjoyed the ride and loved the new Vampire history. I'm giving this one 4 stars!