Flowers for Sarajevo by John McCutcheon

Welcome to Middle-Grade Monday! Today I am looking at the book, Flowers for Sarajevo, by John McCutcheon and illustrated by Kristy Caldwell.

The Story and my Thoughts- 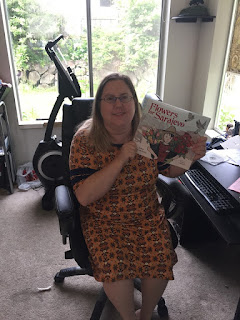 In the market square of Sarajevo is the flower stall of Milo. Drasko is his son and trains with his father to sniff out the best roses. Milo teaches his son that despite all the differences between the people that live in Sarajevo, that just like flowers, they can live side by side and be beautiful.

When war comes to the country, Drasko is left alone to tend the flower stall while his father goes to fight. People become bad-tempered and poor Milo is pushed into the worst corner of the square. The only bright spot is that he is near where the orchestra practices, and when they leave their windows open, he can hear their beautiful music. His memories take him to happy times spent with his father.

One day, as the church bells ring out at ten o'clock, a bomb is dropped in the market, hitting the bakery where people are standing in line for bread. Twenty-two people die. The next day, Milo finds the market square still and empty. Until 10 O'clock, when the door to the orchestra hall opens and a man steps outside, a cello and folding chair in hand.

The man walks over to the rubble of the bakery and sets up his chair to play. (At the end of the book you learn this is Vedran Smailovic and a brief bio is given of his life.) He plays his cello and all, regardless of race or religion, stop to listen. He does this every day for twenty-two days.  Each day, the market begins to return to life, and soon, Milo is selling flowers again as people begin to look forward with hope.

This is such a beautiful story, and when I got to the end of the book and found out it was inspired by real events I felt awe. The back pages contain several items, including a map of the Balkan area and how it has changed over the years because of war. Then, there is the author's note, which explains the true story of Vedran Smailovic playing in the market and why it inspired him to write the book. The following pages contain the bio of Smailovic and an original song written by the author entitled, Streets of Sarajevo.

This is definitely a topic for older children since it involves war, death, and loss, but also hope. The illustrations range in color, expressing the feeling of the people. At first, they are bright and the flowers compliment the market. However, as war happens, they become mostly gray and depressing, except for the images of the flowers Milo tries to sell. When hope is brought back to the market, color once again takes its main place on the page.

This is a thought-provoking read that I think parents and kids need to share together. I'm giving it 4 stars! 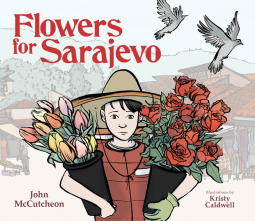