Welcome to YA Friday! Everyone, I have fallen in love with a new YA fantasy series. My daughter checked the first book out of the library and I have already inhaled the first 15. The library wasn't getting them in fast enough so I had to buy 11-15 on my kindle. The series is entitled, Dragon School and book 1 is First Flight by Sarah K. L. Wilson. You can find the books as singles or in 5 book omnibus sets. 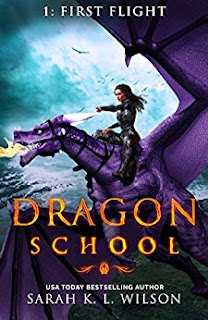 Sixteen-year-old Amel is a cripple who wants to be a dragon rider. Everyone is allowed a chance to try, and those who fail either die or become servants. Everyone thinks she will fail.

On the day of dragon choosing, a dragon actually calls her name, and Amel is made a purple companion. Now all she has to do is take her first flight and she will officially be an initiate. They are supposed to have six weeks of training but after only three days, the students are told they have been called into battle. Only those who make their first jump will continue on.

My Thoughts-
I feel in love right off the bat. Amel is courageous and spunky with a huge heart. She doesn't whimper or whine about her disability instead, she fights hard and finds ways around the problems. The first sign that Amel is special is when her purple dragon actually chooses her, unlike the others who chose their dragons. Then, we find out she can talk to and understand her dragon within her mind. This girl is going places.

The hurdle of book one is the first flight. The student must actually run and jump off a cliff at the right moment and land on their dragon. Amel knows she can't run, but she won't give up.

This series is unique in that each book is a quick read, but with a full story. As an author, the two things that make a book fall into the YA category is a protagonist over the age of 14 and a book of around 70+ words. Instead, this author writes small segments, but they never leave you without a sense of fulfillment. Plus, her endings are incredible. You want to pick up the next book in the series within seconds. At the end of each book I kept telling my daughter, this ending was even better than the last. The story and the world it encapsulates keeps growing and cooler stuff finds its way onto the pages.

This series has it all. There is action, fantasy, romance, danger, magic, and drama! 5 stars!