Welcome to YA Friday! Today I have an Interview with Rachel DeWoskin, author of the YA Historical Fiction, Someday We Will Fly. 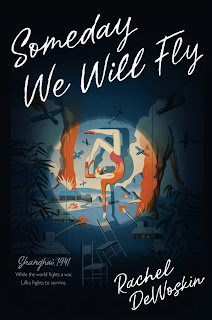 Warsaw, Poland. The year is 1940 and Lillia is fifteen when her mother disappears and her father flees with her and her younger sister, Naomi, to Shanghai, one of the few places that will accept Jews without visas. There they struggle to make a life; they have no money, there is little work, no decent place to live, a culture that doesn't understand them. And always worrying over her mother. How will she find them? Is she still alive?


Meanwhile, Lillia is growing up, trying to care for Naomi, whose development is frighteningly slow, in part from malnourishment. Lillia finds an outlet for her artistic talent by making puppets, remembering the happy days in Warsaw when her family was circus performers. She attends school sporadically, makes friends with Wei, a Chinese boy, and finds work as a performer at a "gentlemen's club" without her father's knowledge. But meanwhile, the conflict grows more intense as the Americans declare war and the Japanese force the Americans in Shanghai into camps. More bombing, more death. Can they survive, caught in the crossfire?

Rachel DeWoskin spent her twenties in China as the unlikely star of a nighttime soap opera that inspired her memoir Foreign Babes in Beijing. She is the author of Repeat After Me and Big Girl Small, which received the American Library Association's Alex Award for an adult book with special appeal to teen readers; Rachel's conversations with young readers inspired her to write her first YA novel, Blind. Rachel is on the faculty of the University of Chicago, where she teaches creative writing. She lives in Chicago with her husband, playwright Zayd Dohrn, and their two daughters. Rachel and her family spent six summers in Shanghai while she researched Someday We Will Fly.

1. Did your time living in China lead to your inspiration in writing this story?

The years I spent in China inform and inspire everything I write. China and my friends there gave me a view of my own life, of America, and of perspectives important, valid, and vastly different from mine. Of course, this novel, in particular, is deeply inspired by China, and by the fact that Shanghai offered a haven to thousands of Jewish families fleeing persecution and murder in Europe. I wanted to explore what factors contributed to China having done the right thing by so many desperate refugees when the rest of the world closed its borders. And I was interested in the community itself, in how European Jews in the 1940's might have experienced Shanghai, in all the languages they spoke, in their friendships and difficulties. In human adaptability and resilience, really.

2. How difficult was it to do the research on this little known part of history?

The research was intense. I spent seven summers in Shanghai, living in the Embankment Building, which served in the 1930s and 40s as the processing center for Jewish refugees. It was amazing and sometimes surreal to wander those hallways, imagining. I also read deeply, spent time in archives from China to New York, and interviewed as many people as would talk to me about those years - about their own or their parents' or grandparents' experiences. Research begets not just knowledge (and wonder), but also tremendous gratitude. It's hard to overstate how much generosity people showed - those who told me their stories, who wrote accounts of this particular Shanghai experience, and who, in some cases, let me roam through their houses and belongings and memories.

I met a doctor at UChicago (where I teach), in 2014 quite by accident, and our meeting felt to me like a miracle. Her name is Jacqueline Pardo, and her mother, Karin Pardo (nee Zacharias) was a Shanghai Jew. I went to her house and was stunned to discover a world-class archive of objects, documents, and photographs that belonged to her mother in Shanghai during World War II. The objects, documents, and photos of Karin’s girlhood gave me the sweep and scope of a lived girlhood in Shanghai during the war – I used them to create Lillia’s school life, curriculum, and many detailed aspects of her coming of age. I was so moved by Jacqueline’s mother’s belongings that she and I put up an exhibit at the University of Chicago this spring: Karin’s school bag; notebooks and diaries; a thank you note she and other members of her Girl Guide troupe wrote to American soldiers who had given them chocolate; exemplary report cards from the Kadoorie School (on which her music teacher hilariously notes: “can’t sing”); food ration coupons; passports stamped with “J” for Jewish; menus from a short-lived restaurant Karin’s family opened; Chinese language notes; Japanese language notes; diaries; a shirt with embroidered dragons twisting up its sides, and paper dolls Karin’s grandmother sent her from Germany, before dying at Theresienstadt.

I also talked with and read the books of the supremely generous Michael Blumenthal, a former Treasury secretary under President Jimmy Carter. Michael is a Shanghai Jew who grew up in the neighborhood of Hongkou (which in 1943 became a ghetto --— all Jewish refugees were forced to move there.). He gave me a view of China and humanity both profound and intricately detailed. He remembered the boys walking in circles around Hongkou, like teenage boys anywhere, hoping for the notice of their crushes. He also described what it felt like to come to understand as a child that some adults rally in the face of hardship, while others disintegrate.  About each powerful person he met while working in the White House he wondered, how would he/she do in 1940’s Shanghai, dressed in flour sacks? His wonder and empathy informed and continue to inform mine.

3. What do you want readers to take away from your novel?

I want readers to take away the inspiration to write their novels! To record histories both personal and political/public, to explore their own wonder and curiosities.

This road differs from book to book, but for Someday We Will Fly, it was smooth and lovely. The people at Viking are brilliant and thoughtful - my editor there, Regina Hayes, is one of the most elegant readers and thinkers I've ever met. This was the second book of a two-book deal (the first was Blind, the only other YA book I've written), so I knew my team, and didn't have to fret about setting the book up, which was a vast luxury.

5. Any advice for aspiring writers?
Get up in the mornings (drink some coffee) and write your stories! They count, and your perspective on the world matters. And you don't have to write what you know - you can write what you wonder. Read and write on; ask your questions! Love, rdw