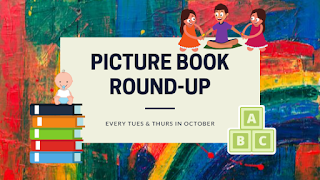 Welcome to October Picture Book Round-Up! All this month I will be reviewing picture books every Tuesday and Thursday! To start us off I have a delightful release, The Boy in the Big Blue Glasses by Susanne Gervay and Marjorie Crosby-Fairall. 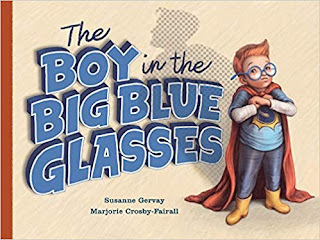 The Boy in the Big Blue Glasses is about a little boy named Sam. One day he gets glasses, blue ones, and everyone tells him how handsome he looks. He doesn't think so. Then people start asking, "Where's Sammy?", the reader knows it's people trying to make Sam feel better, but in the story, Sam just thinks people can't see the real him anymore. Only his friend George still knows him.

Sam tries to hide his glasses, but the adults keep finding them. He is forced to wear them and some classmates tease him. Then, one day George stays home sick from school and Sam has no one to play with. He takes off his glasses to clean them, and instead of seeing other students in the class, his blurry eyes make people seem like waving animals. He starts joking around and soon everyone thinks he is funny. When George comes back to school, Sam is now okay with his glasses, and everyone plays together. 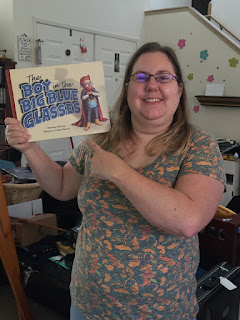 The story is perfect for young ones getting their first pair of glasses. The events are relatable, from people always telling you how good you look in your new glasses, to the part where kids in class might tease you. It shows a child whether they wear glasses or not, they are still the same person. One cute tidbit, as you read the story, the shadow behind Sam often appears to be a grown-up superhero. I'm giving this one 4 stars!