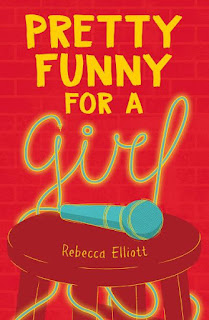 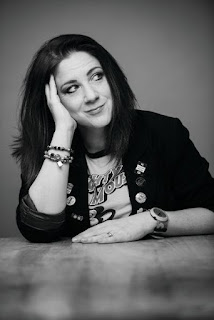 I’ve been writing and illustrating picture books for many years but it had always been my ambition to write a YA book, and I finally got around to it with Pretty Funny for a Girl.

I’m a huge fan of YA and find those teenage years the most fascinating.  Although it was a long (LONG) time ago, that period of my life still feels so vivid to me; it’s such a high stakes time in your life where every day has the potential to be life-changing. I have the greatest respect for teenagers, which is why I like writing about them so much. It’s such an exciting yet bat-crap crazy time in your life. In just a few years you go from snotty kid to a fully-formed person, it’s insane!

You’re suddenly making your own decisions, forming your own opinions, molding your own future, choosing what kind of person you want to be, falling in love for the first time, and all the while battling cruel expectations from the world and the media, not to mention the raging hormone battle within. I tell you, teenagers are frickin’ heroes.

Unlike writing for the under 10s, I love the freedom that writing a full-length novel gives you; the need to be super concise isn’t there anymore and you can really be yourself and take a thought for a walk, which I love. On the other hand, unlike a shorter book, there comes a point with a novel when you can’t go back and re-read what you’ve already written every time you write another chapter and it all becomes a bit unwieldy, like trying to run with wobbly jelly in your hands that just keeps getting bigger. But you have to trust that as long as you don’t drop it, it will hold together and keep its shape and that it will all be worthwhile in the end, cos who doesn’t enjoy a massive plate of jelly (ok so it’s *possible* I might have taken the jelly analogy a bit too far, what were we talking about again?)

What should youth know about loving the body they're in?

Whilst, as with most of us, my protagonist Haylah will always struggle a little with her body confidence, I think she’d also say that one of the coolest realisations as a feminist is that there is no right or wrong way for a girl to look, to dress, to act. So be you—big, small, loud, shy, “feminine,” “masculine,” high-heeled and preened, DM-wearing and pierced, and anything and everything in between and outside, it’s ALL GOOD, and it’s all beautiful. We are sold, particularly on social media, the ridiculous and unobtainable ideal of “perfection,” whereas the message should, of course, and particularly in respect to teenagers already bombarded by judgement and pressure, be that YOU ARE PERFECT REGARDLESS. By getting on stage and being the girl she is, nothing more, nothing less, Haylah isn’t proving that she thinks herself perfect, but that she’s happy in her own skin. As Sophia Bush so eloquently put it, “You are allowed to be both a masterpiece and a work in progress, simultaneously.”

I very much didn’t want the body image thing to be the central theme of the book. So often when plus-sized female characters are the main protagonist of books and movies, their weight is the major factor, the main narrative hook to hang everything else from. But guess what—when you are bigger that usually isn’t the main thrust of your own narrative  (and I certainly never wanted to lead her towards some “happy” ending when she loses the weight and all is well with her world—like thin people have it all sorted too!).

Yes Haylah feels that she’s big and at times wrestles with the way that makes people perceive her, but for the most part she’s quite happy with herself and what she thinks about way more than the way she looks is her ambitions to do something amazing—become a stand-up comic. I only wish that the way we look, particularly for teenagers, could take a back seat to the way more important stuff like our passions and ambitions.

So I hope one of the central themes of the books is, screw the haters, screw the ridiculous expectations of society and social media, the only opinion of you that matters is your own opinion. So be whoever the hell you want to be and be proud—shoulders back, tits out and go show the world who you really are.

Do you have a secret passion for comedy? If so, who is your favorite comedian?

As a teen I was utterly obsessed with comedy and comedians (I would never have had the courage that Haylah does to so stand-up comedy), but I did spend hours writing comedy sketches and harboured secret dreams of becoming a sketch comedian!  It’s probably super shallow but to me there has always been nothing more impressive than making a funny.

As for my favourite comedian, oh blimey, where to start?? As a teenager the UK comedians French and Saunders and Victoria Wood were my absolute idols. I *love* watching live stand-up, it’s so different to seeing it on a screen and I've recently been lucky enough to see awesome stand-up comics Sindhu Vee, Susan Calman and Hannah Gadsby. Hannah Gadsby in particular I think has changed the landscape of stand-up—she manages to deal with huge issues like sexism, homophobia, and disability in a warm yet cutting, and utterly hilarious way. I urge everyone to go watch her shows Nanette and Douglas on Netflix NOW!

Sophie Hagen and Sophie Duker are also exciting me right now (although maybe I just have a thing for the name "Sophie?”). Oh and I *have* to mention my best friend, stand-up comedian Kirsty Hudson with whom I do a weekly podcast (“Don’t Laugh But”). I have to mention her because otherwise she’ll kill me. Or at least take the p*** out of me in one of her next routines. Also, TBH, the woman makes me pee myself laughing on most days.

Every stage of my career in books over the last 18 years, from illustrating to writing picture books to landing a YA book deal, has been hard work and involved a lot (and I mean a LOT!) of rejection. But hey, there’s little satisfaction in doing something easily! And luckily you learn way more from your failures than your successes. Having worked on picture books and early readers (like Owl Diaries) for years, deciding to follow my ambitions to write a YA novel was like completely changing careers and starting from scratch. I spent four years on a YA book, which didn’t get me a publishing deal but was good enough to get me a new literary agent, and Penguin Random House UK luckily saw enough potential in my work to ask what else I had on the go. I had nothing! Just one idea which was simply “14 year plus-size girl known as ‘Pig’ wants to be a stand-up comedian;” the publisher thought it sounded great so instead of the years spent on the previous book I wrote this in around three months (then edited it for another six months until I eventually got the deal with Penguin), and then Peachtree US read it and wanted to publish it in the States which is A. Mazing. Literally a dream-come-true. I’m sure there will be a many more failures and rejections in my future career, but if I learned anything it’s that if you have a dream, don’t let anything put you off and you’ll get there, or maybe even somewhere better but unexpected in the end.

I’ve written the sequel to Pretty Funny for a Girl called Pretty Rude for a Girl and am currently starting work on a possible third which is super exciting. As you write about characters you kind of fall in love with them and they come alive in your head, so it’s amazing to be given the opportunity to carry on their stories. Also LOTS more Owl Diaries and Unicorn Diaries! I always have lots of other ideas bubbling around in my head too which I’m always desperate to have the time to take for a walk but we’ll see if I get the time!

Buy it Now-
Amazon
Posted by Dorine White at 5:00 AM