YA Series Spotlight- The Watchers by Deirda Eden

The Watchers Series has been described as Lord of The Rings meets Supernatural. The Watchers are supernatural beings in human form whose duty it is to protect and guard mankind from the armies of darkness. Unfortunately, some of these Watchers go bad.

Deirdra Eden's, The Watcher's Series, is written in a traditional fairytale style with a young girl's discovery of incredible, but dangerous powers within herself, a cast of humorous side-kicks, a quest for greater self-discovery and purpose, and villains of epic proportions. Great for readers ages ten and up.

The main themes are Fighting for Your Dreams, Always Having Hope, and Spreading Light. 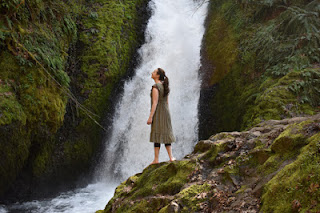 Deirdra has spent the last decade captivating audiences of all ages with her bestselling novels and fairy tales. Her specialty is paranormal theology that delves into documented historical phenomenon and natural disasters of biblical proportions. Deirdra enjoys horseback riding through open meadows, swimming in the ocean, hiking up mountains, camping in cool shady woods, cuddling her kitties, climbing trees barefoot, and going on adventures with her family and friends.

Book One- The Watchers Knight of Light

“The Watchers” are supernatural beings in human form, charged with protecting mankind from the armies of darkness. Unfortunately, some of these Watchers go bad.

In England, 1270 A.D., Auriella flees her village after being accused of witchcraft. Pursued by nightmarish creatures, she struggles to accept the truth about her humanity.

Filled with fairies, dwarves, pixies, dragons, and monsters, Knight of Light is an enthralling tale that will capture the imaginations of readers young and old.